We’re good to go. We adhere to the Covid-19 Industry Standard. View our certificate.

The City of Chester

The elegant, ancient and beautiful small City is situated on a sandstone bluff overlooking the River Dee and North Wales.

The City has the distinction of having the most complete circuit of Roman, Saxon and Medieval City walls in Britain, together with the unique two – tier galleries of shops know as the ” Rows “.

Chester certainly owes its existence to the original strategic importance of the site, recognised by the Romans almost 2000 years ago. Although the site would have been previously occupied by local tribes – the ” Cornovii ” it was the Roman legions who established a fort or marching camp at the mouth of the river Dee around AD 47 and later , approximately AD 70 , a main fort was established, developing ultimately into a 60 acre site. The fort was used a the base for the Legio 11 Adiutrix Pia Fidelis ( Dutiful and Faithful ). The fort was named Deva or Dewa from the name of the river – the Dyfrdwy.

About AD 87 the Legio XX Valeria Victrix ( Strong and Victorious ) took over the fortress and approximately AD102 the fortress was expanded and built in stone. A large amphitheatre was constructed, seating about 7-8000 people.

The Legions abandoned the fortress by the end of the 4th Century and Chester seems to have been largely deserted for many years, literally going through the ” Dark Ages ” although there may have been a small number of people living within the walls and farming the land outside.

After the Romans, left England and Wales split into rival Kingdoms, it is not completely sure whether we continued to be part of the territory of the Cornovii or whether it had already a substantial population of Saxons or Irish in situ. We do know that the land of the Cornovii became the Kingdom of Powys.

The Romans, under the Roman emporer Honorius abandoned responsibility for the defence of Britain and control fell into the hands of local warlords. Two large Kingdoms came into being in the 7th Century, Northumbria in the north of England and Mercia in the Midlands. The strategic position of Chester ensured that it figured prominently for the next few centuries particularly after falling under Saxon control during the expansion of Mercia.

In 907, Aethelflaed, daughter of King Alfred, established a ” burgh ” ( a fortified town ) at Chester, major activity increased in trade and occupations, coupled with a similar increase in population. Prosperity started to show.

In 1070, William the Conqueror decided to exert his power and authority in Cheshire, marching through the County, destroying much of the infrastructure. On arriving in Chester he commissioned the building of a motte and bailey stile castle and established the Earldom of Chester, the first Norman Earl being his nephew, Hugh D’Avranche who had the unfortunate nickname of Lupus ( the wolf ) or the Fat. He was followed by a further six Earls until the last one, John the Scot died in 1237 without an heir and the Earldom was then annexed to the Crown. The Earls of Chester had always controlled large areas of land throughout the country, becoming very powerful figures.

Hugh D’ Avranche had commissioned the Benedictine Abbey in 1092, again giving this power base of Chester extra credibility. Chester remained quiet small despite it’s power and wealth, heavily dependent on agriculture and land ownership, the population in the late 11th Century being in the region of 1500.

In the 13th Century Edward the first built a string of castles around North Wales, using Chester as a base for his armies and craftsmen, thus bringing great prosperity to the City which was decimated in 1349 by the Black Death, a third of the population falling to the disease. By then the river Dee was also silting up creating a serious problem for the long – term future of the port. 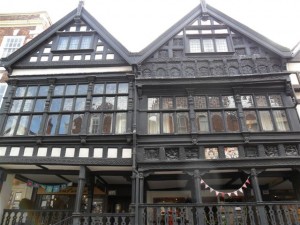 The Rows, Chester’s most famous architectural feature were starting to be formed in the 13th Century, going along the four main streets , consisting of long galleries of shops and houses at first floor level.

The walls were complete by then to the almost two mile circuit that we have today. The defensive system also included ten towers, ditches, gates and outworks. Most of the towers have survived, in various states of repair but the good news for Citizens and visitors alike, is that we can still go in to several of the towers when accompanied by one of the Official Chester Tour Guides.

The most impressive tower must be the Water Tower, built in 1323, attached to the main City wall by a 100ft spur wall. When first built it stood in the river and protected the quays at this area, sadly the river silted up eventually and the tower now stands alone . 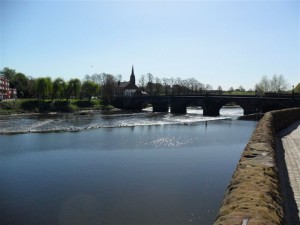 The river did bring great trade to Chester , leather being an important part of the economy, encompassing several different trades from the processing of the raw material right through to the finished goods , involving craftsmen such as shoemakers, glovers, saddlers, pursers, harness-makers etc.

The raw hides and skins would have been obtained from local butchers , skins were also imported from Ireland, with sheepskins being the main product . The fur trade was also prevalent at the time.

Henry V111 had a major effect on Chester with the dissolution of the religious houses, the Abbey being dissolved in 1540 , being refounded the following year as a Church of England Cathedral, this still has pride of place in our hearts today.

The English Civil War ( a misnomer in terms, it was not restricted to England and certainly was not civil !! ) hit Chester badly, we were a Royalist supporter , earthwork defences were erected to protect the suburbs that had grown up outside the Walls. Parliamentary troops attacked Chester in 1643 but were beaten back and they retreated. In November 1644 the parliamentary troops laid siege to Chester . On the 24th September 1645 we had the battle of Rowton Moor , a few miles outside Chester where the Royalist troops were defeated and retreated back to the City where we held out until February 1646, enduring a very tough siege before surrendering on 2nd February. Chester suffered a high death toll, starvation and destruction and for many years after it was in a very poor state. In 1647 the plague struck again causing more misery.

The effects of the Civil War can be seen on many places on the City Walls and Towers .

Chester had been severely affected by the Civil War , the citizens having suffered severe hardships , the siege left long memories in people and the gaps where buildings once stood were evident for many decades which served as a constant reminder .

The restoration of the monarchy in May 1660 was welcomed by the people of Chester , trade began to improve, the Cathedral was restored to its former status and a general feeling of wellbeing came to all. Chester once again became the major wholesale and retail market for the County of Cheshire and also North Wales. Flour milling flourished at the Dee bridge, a water supply was developed and piped into the City and the leather trade flourished again, tobacco and snuff mills appeared, and shipbuilding established by the end of the century. The port flourished with linen from Ireland becoming increasingly important , trade with Spain, Portugal, the Baltics and Scandinavia established and a new tobacco and cotton trade link with North America in place.

The old problem of the silting of the Dee was increasingly an issue and gradually the port moved further down the Wirral peninsula and away from the old areas.

As merchants became wealthier there was a great scene of building activity , replacing their old timber houses with new elegant brick mansions and the City Assembly also started to construct fine new civic buildings, this was indeed a good time for all.

By the time we came into the Georgian period ( 1714 – 1830 ) , Chester was typical of many other county towns, expanding, prosperous and very fashionable , particularly with the wealthy leisured gentry who built fine mansions to enjoy “ the Season “, culminating with the May horse racing meeting. Luxury goods were created and sold , the population grew in size and affluence , there were over a hundred separate trades and crafts , mainly for high quality goods and services, there was over sixteen hairdressers in the centre.

The Coach business was very important , over thirty coaches a day leaving the City for all major destinations , the journey to London eventually taking only two days by the middle of the 18th century due to the efficient turnpike road system.

The City expanded outside of the Walls when many fine Georgian town houses were built , the General Infirmary was built in 1761 , a large building with over one hundred beds, and for its time was extremely kind and progressive. 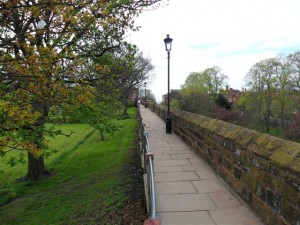 The Walls were repaired and started to be used as a promenade, the medieval gates were demolished and fine new gates created and Chester Castle complex was built in the Greek revival style by Thomas Harrison and the air of opulence continued to pervade the City, by 1851 the population rose to 27,000..

Chester progressed very well into the Victorian period, it escaped the industrialisation of other Northern towns and Cities and retained an air of a genteel place to live and work, also popular with wealthy tourists, made easier by the establishment of the railway system. Many tourist came from Europe, we even had a bilingual French and English guide book in 1851. Americans were also visiting in large numbers , having arrived at Liverpool and hearing of the magnificence of Chester. Many fine hotels were built to accommodate the tourist trade, and more shops were opened to serve the opulent clientele. Eastgate Street, even today one of our finest streets was being compared to Regent Street in London.

Following the destruction of the previous Town Hall, known as the Exchange , by fire in December 1862 a fine new Town Hall was completed in 1869 in High Gothic style by the Belfast architect W.H. Lynn and opened by the Prince of Wales, the future Edward V11.

During the later half of the nineteenth century the architects of the City decided to create the “ Black and White revival “ , influenced by the appearance of Chester in Tudor and medieval times , giving us the distinctive feature we enjoy today. Many other buildings were created in brick and stone giving a lovely contrast and a real feast for the eyes. The buildings were greatly influenced by the Grosvenor family who became the Dukes of Westminster, they employed one of the finest local architects, John Douglas who designed some of the most loved buildings , and of course the iconic Eastgate Clock, the second most photographed timepiece in the world after Big Ben.

During the Twentieth century Chester witnessed enormous economic and social changes, strengthening its position as a tourism and service centre. The passion for creating exuberant black and white buildings continued further encouraging visitors to come and see this jewel in the Crown of the North West of England, still ranking as one of the most successful provincial shopping centres in the country, welcoming in excess of eight million visitors a year. The City is noted for its small specialist shops in the Rows. The greatest change to central Chester took place in the 1960s when the Grosvenor Shopping Centre was created , sadly losing some fine buildings but nevertheless bringing vibrancy and employment to the City.

Modern Chester is an absolute delight to visit in all seasons, we have Festivals galore, the famous Roodee racecourse, a delightful circular racecourse, the beautiful River Dee , Chester Cathedral, Chester Zoo, one of, if not the best, in the Country, the attractions are almost too many to mention , there is something for every one in the vibrant , modern yet historic fine City which should continue to flourish into the 21st Century.